Choosing among all the possible hiking trails in RMNP proved to be a thoughtful undertaking. After our first hike in RMNP to Lake Mills, and having completed two hikes already, we searched for a hike that would offer the same beauty we had seen while being doable for our tired legs. The website, www.rockymountainhikingtrails.com, provides the should-be-considered information for such a decision. After perusing the site, pouring over the facts on length, features, difficulty levels, etc., we decided on the hike to Emerald Lake which would take us to two other lakes along the way. Score!

This hike begins at the Bear Lake Trail Head, and, like the Mills Lake hike, it is very popular. To avoid having to ride the shuttle to the trail head or hike the trail surrounded by others, get there early!

Our drive to the trail head was briefly and pleasantly interrupted by an entire family of elk lounging on the road and grazing on the surrounding foliage. The mamas, grandmamas, and babies checked us out as intently, though probably not as admiringly, as we did them. 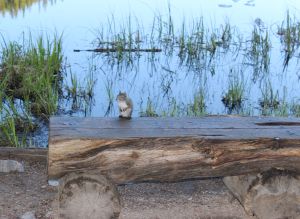 The trail begins with a half-mile, non-stop climb to Nymph Lake. There, we were greeted by a curious and energetic chipmunk who did not want to give up his seat to let us rest. Who could blame him, though? 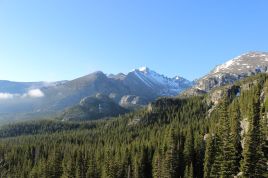 From there, the trail continues for about a mile to Dream Lake.  After climbing steadily for the first half mile, I was expecting some reprieve, but no. This mile was, I think, even steeper and more exhilarating. Along this part of the trail, the views are simply stunning. Right before arriving at Dream Lake, the trail splits, offering a spur that leads to Lake Haiyaha. We considered elongating our hike by following that path on our way back from Emerald Lake, but, looking at the snow which covered the trail, still, at the base, we decided that trek would be better to take at a later date. 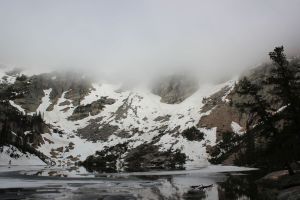 After enjoying the views at Dream Lake, we headed out for Emerald Lake. This part of the trail was yet another climb and partly covered with slick, packed snow. Through the first part of the hike we were showered with sun and amazed with blue skies (You don’t see that kind of blue in Houston), but as we approached Emerald Lake, all that changed. Emerging onto the shore of the lake, at an elevation of 10, 110 feet, we were engulfed in clouds. The lake was covered partly in ice, and the surrounding mountains blanketed in snow.

On the way back down, singing, “I love going downhill. I love going downhill,” we ran into a couple of Park Rangers who were a little surprised that some of us made it all the way up to Emerald Lake, because of all the late-in-the-season snow still left on the trail.  We also pondered the bravery, expressions of misery, and altitude fatigue of tennis-shoe and t-shirt dressed families whose fathers carried wee children and babies in shaded, framed enclosures like donkeys.

This is a great hike. We do recommend being the early bird in order to avoid the crowds, see some beautiful animals and flowers, and take advantage of the serene quiet and peace this trail offers before it is overrun with less than natural wildlife.