Actual items taken from Facebook Group, Laramie Wyoming Buy and Sell Stuff.  No rabbits or chickens were harmed in the making of this post. 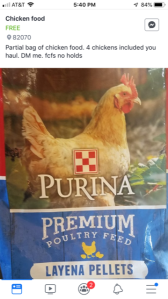 We got the chickens one Easter when li’l Jackie stole ‘em out of old man Franklin’s yard.  We let ‘em run the house when they was little but they got big and didn’t wanna go outside.  Jackie was thinkin’ they was them Leghorn chickens and would lay white eggs but one of ‘em’s a Araucana and its always dropping blue eggs and the other three’s them Olive Egger cross-breeded kind that make green ones.  They’re mean and always peckin’ at the cat and we don’t find the eggs right away on account of they drop em’ behind the sofa or in the laundry room and we don’t know until they stank.  Nobody’ll eat the colored eggs anyway, even though they look the same on the inside. The chickens hadn’t been too much mess ‘cuz dogs is coprophagous and Buckney’d just follow ‘em around and lick it up like whoop cream but then he got worms and we hadda put him out.  One night we put the chickens back in Franklin’s yard but they just back here the next day and comin’ in through the tear in the screen door.  We finally decided they gotta go somewhere far, even though they all got names.

R2 was always the spoiled one.  Such a mama’s boy, always whining about having to anything.  Hell, she changed his oil until he was, like, twelve, and I’m like, “Dude, seriously, it’s not that hard!”  Used to wheel around naked as a trash can, no vocabulary, no social skills, and then he lands the big one, the gig, and all of a sudden he’s zippin’ around in his fancy blue suit and treatin’ the rest of us like shit.  Everyone thinks he’s so damn cute, right, the brat, but the truth is he’s a rotten, selfish can of aluminum wire.  I asked him for fifty bucks the other day and he’s all like, “No, you’re gonna spend it on synthetic oils and some rusted alley-can whore,” like I need his lectures or his newfound morality.  Jerk didn’t even get me a role as an extra.  I would have rocked the scene in Episode 3 where the droid is having his feet burned.  Think Gielgud’s Hamlet.

Anyone have fifty bucks?  I can fill up your tires for you. . .

Are your children too quiet? Do you wish that there was more noise in your house? Try the Disney Dory Bowling Set! Who doesn’t appreciate the sound of a hard, plastic bowling ball on your wood or tile floor, crashing violently into pins while you relax in the bathtub?  Or the pleasantly musical echo of a pin thumped against a younger sibling’s head?  Comes complete with instructions and additional activities, such as juggling, the riotous “Don’t Hit the TV” game, and “Lawn Darts” (weighted, stainless steel attachable dart heads sold separately).

The change was subtle, like the moon from night to night in slow wax.  They’re everywhere of course.  Dogs chase them, cars avoid them.  They blend into the colors of the landscape, and you can often miss them except for their cotton colored tails bouncing down the alley like marshmallows.  But then we saw signs: claw-marks on the fence, too small for a bear. At night, queer sounds cut through the cold air, guttural and malevolent.  There were rumors: a husk of hares stalking a fawn; two rabbits at dusk, walking slowly down an alley, their claws long and bloodied. Maybe they’re not harmless little bunnies.

We begin in the morning, with nets and snares and Safari™Professional Nail Trimmers.  Cutting their nails is the first step to ending this nightmare.  The moon is fat and high.  I’ll lock my doors as soon as Suzanne comes back from walking the dog.  They’ve been gone a very long time. . .

It has been an eventful year since our last camping trip: new jobs, leaving those jobs, selling a house, downsizing, and loading up the moving van on a prayer and moving to Laramie.  My son recently flew up from Houston to attend a Python programming camp at Colorado State University in Ft. Collins, so we planned a camping trip for the days between his camp and his flight home.  We’d had our eye on Silver Lake campground, near the top of the Snowy Range on Highway 130 west of Laramie, but it was (and still is) covered in snow.  Father west, 20 miles or so east of Saratoga, Ryan Park was snowless and available.  The reservation site recreation.gov stated that guests were permitted to erect only one tent per camp site; the camp host, however, had no such restrictions.

Many of the sites at Ryan Park are shadeless, including ours.  The afternoon sun proved relentless and heated up the site; a tarp we hung between two trees gave us a sliver of comfort.  A three-quarter mile path circles the campsite, following Carroll Creek and the larger Barrett Creek, both of which roiled with cold snowmelt.  Thanks to an informative historical marker, we learned that the campsite had been used as a POW camp during World War II. Prisoners from Hitler’s and Mussolini’s armies worked six days a week there for the Crow Timber Company between 1942 and 1946.

After a restless and cold first night on an uncooperative air mattress, we headed to the Little Laramie Trailhead, back over the pass to the Laramie side of Snowy Range.  This was a beautiful hike, one of our favorites so far.  Dense, lodgepole pine forest surrounds a well-maintained, easy to follow path.  Our Alltrails app said we put in 2.9 miles; trail extensions allow for longer hikes. 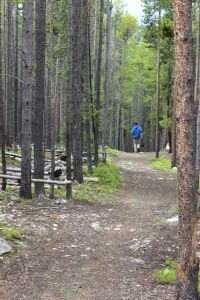 Last summer, our tents did a great job of keeping out rain.  Not so, this trip.  Along with the faulty mattress, our final night at Ryan Park brought a midnight rainstorm and the slow drip of water inside the tent.  When the sun rose, we skipped camp breakfast (except for coffee), stuffed the wet stuff into the back of the Pilot, and were back in Laramie by 8:00.

The Fourth of July in Laramie was perfect.  In ideal weather, we spent the afternoon at Washington Park with 10,000 or so others listening to Danno & Have Fun Will Travel and The Boogie Woogers.  After a lovely dinner at our new favorite restaurant, Altitude, we brought the lawn chairs out to the edge of LaPrele Park, just south of the University, to watch the fireworks.  In the distance, lightning from a storm over Medicine Bow National Forest lit up the clouds behind the display.  Here we met David and his dog Gonzo.  By his own admission, David had spent too long at the pubs and had consumed too many “Colorado edibles.”  A Viet-Nam Veteran and Texan from sometime in his history, he ranted about Trump, extolled the beauties of Wyoming and its history, talked about Idaho and Oregon and Californians, women drivers, Chief Washakie—whose statue sits on Grand Avenue between 15th and 17th Street—and then said goodbye before the fireworks had ended, wishing us well in our new home.  I hope to run into him again some day.